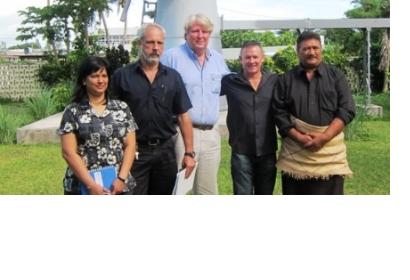 With the continuous support being provided by the Government of Austria, the UN-SPIDER Programme is increasing its support to the Kingdom of Tonga by having carried out a Technical Advisory Mission, at the request of the Tongan Government through the Ministry of Lands, Survey and Natural Resources. The Kingdom of Tonga is exposed to earthquakes, volcanoes, cyclones and other coastal hazards such as storm surges. In addition, in September 2009, Tonga was affected by a tsunami, which provoked extensive impacts on one of the outer islands. Furthermore, as a Small Island Developing State, the Kingdom of Tonga is experiencing the impacts of sea-level rise.

David Stevens, UN-SPIDER Programme Coordinator, headed the mission team and was joined by experts from SOPAC, Dr. Wolf Forsttreuter, UN-OCHA, Ms. Rashmi Rita. Mr. Richard Kautoke Head of the GIS Division of the  Ministry of Lands, Survey and Natural Resources, as well as by Dave Leng a leading regional crowdsourcing expert. The mission builds upon the technical advisory support that UN-SPIDER has been providing to all Pacific Island Countries since 2008 with the support from the Government of Austria. The mission worked closely with Mr. Mafua-'i-Vai'utukakau Maka from the National Emergency Management Office (NEMO).

The Mission was carried out from 20 to 23 March and included meetings with key stakeholders and a half-day workshop for senior policy makers, data providers, and disaster management and disaster risk reduction end users with the purpose of awareness generation and assessing the country needs and capacity. The aim of the mission was to 1. Review current policies, procedures and mechanisms related to the use of geo-spatial information and make recommendations; 2. To engage key stakeholders who are custodians of geo-spatial data relevant to disaster risk management; 3. Develop an institutional strengthening strategy for stakeholder agencies (individuals, institutions and infrastructure), and finally 4. Develop a long-term association with UN-SPIDER to take advantage of outreach activities, institutional strengthening programmes and resources available through the UN-SPIDER network.

Initial recommendations put forward by the mission team include the need to focus on the establishment and consolidation of an institutional and legal framework regarding geospatial data including the need to ensure the wide practice and ease of data sharing. This includes the need to study the possibility of establishing a National Spatial Database Infrastructure (NSDI), aiming at contributing to the definition of the national spatial database (including the various data custodians) and data sharing policies, together with the strengthening of the leading role of the GIS Division of the Ministry of Lands, Survey and Natural Resources.

The mission team also recommended the organisation of a one-day awareness raising high-level meeting for high ranking officials followed by a 5-day capacity building activity, either focusing on a vulnerability mapping exercise or an emergency response simulation exercise. This proposed event is scheduled initially to take place in August/September 2012.

The mission team also highlighted the need to ensure access to satellite imagery for  on-going disaster events (emergency response) by mapping opportunities, creating linkages to existing mechanisms and defining roles of national institutions and regional partners including SOPAC. This should include also working closely with providers of satellite imagery to ensure data is received with the  possibility of carrying out the pre-processing operations.

Finally, the mission team agreed that they would explore together the use of crowdsourcing  capabilities in supporting  NEMO’s needs, including the planning and carrying out of a simulation exercise similar to the simulation carried out by Samoa in December 2011, with the support of the UN-SPIDER Programme.