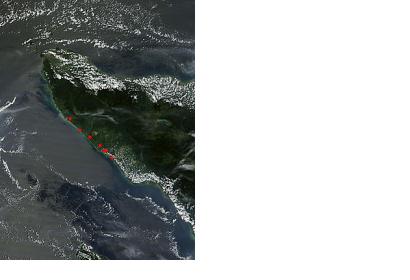 NASA’s satellites detected over 500 hotspots of forest, plantation and peatland fires across the island of Sumatra, Indonesia. In Riau Province alone, the authorities located over 380 hotspots through satellite imagery from NASA's Terra and Aqua missions.

The scarcity of rainfall contributes to the wide spread of agricultural fires, once set by farmers to clear the land. On 15 February, the number of hotspots detected by the satellites doubled from 350 to 700 as compared to the day before.

On February 11, the National Disaster Mitigation Agency (BNPB) organized a meeting in order to coordinate governmental activities to fight the fires, haze and drought in the region. The government agreed on taking ground-based and aerial measures, which include military forces on the land and even the implementation of cloud seeding technology.