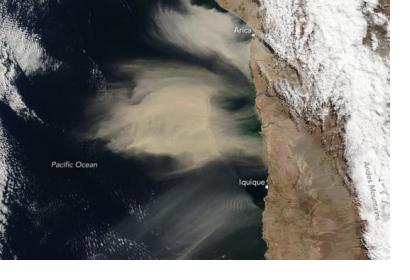 On the beginning of July 2016, airborne dust reached the coast of Chile. This phenomenon hardly ever occurs in the west coast of South America, according to atmospheric researchers.

The Moderate Resolution Imaging Spectroradiometer (MODIS) on the Terra satellite of the National Aeronautics and Space Administration (NASA) captured some natural-color images of the event on the 8 of July.

The dust source seems to be located between the Andes mountain range in South America and the Pacific coast, especially from an elevated slope allowing the dust to be transported that far.

The storm which brought the dust over Chile was accompanied by wind, rain and snow, reducing the visibility in nearby cities and leading to the closure of at least two airports as reported by the twitter account of the Iquique Meteorological Center.