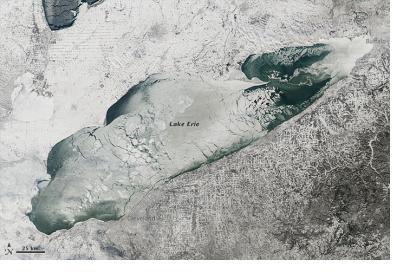 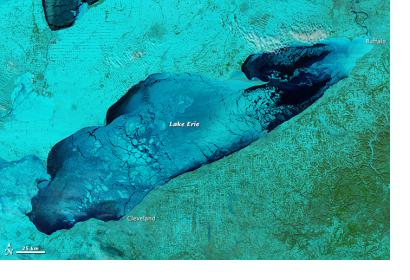 The top image shows Lake Erie in natural color, the second one shows a blend of shortwave infrared, near infrared and red that help distinguish ice from water. Ice is pale blue, the thicker the brighter, open water is navy, and snow is green.

Though ice covers the Lakes every year, news reports says that this year the ice cover was thicker and wider spread than it has been in nearly two decades. This caused disturbance in ship traffic in the region.

On January 9, nearly 90% of Lake Erie was covered with ice. Ironically, the ice cap on top of the lakes stifled the persistent “lake effect” snowstorms that had buried Buffalo, New York, and other towns during the deep freeze of early January. Cold arctic winds blowing across the frozen lake could no longer pick up moisture.