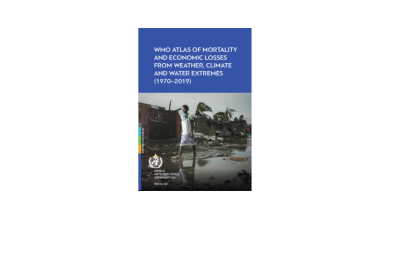 On 31 August 2021, the World Meteorological Organization (WMO) launched its Atlas of Mortality and Economic Losses from Weather, Climate and Water Extremes (1970–2019).  This publication presents information on the impacts of extreme weather, climate and water-related events that took place between 1970 and 2019.  It presents historic data on impacts provoked by storms, floods, droughts, extreme temperature, landslides, wildfires, and other hazards.  Impacts are expressed in terms of fatalities and economic losses. The publication benefitted from the contributions by the Centre for Research on the Epidemiology of Disasters (CRED), the World Health Organization (WHO) and Public Health England, and the United Nations Office for Disaster Risk Reduction (UNDRR).

According to the Atlas, the ten worst disasters in terms of fatalities impacted Ethiopia, Bangladesh, Sudan, Myanmar, Mozambique, the Russian Federation, and the Bolivarian Republic of Venezuela. These fatalities were provoked by droughts, storms, floods, and extreme temperature. In Ethiopia, droughts in 1973 and 1983 killed 400,000 people. In Bangladesh, storms Bhola in 1970 and Gorky 1991 killed 438,886 people. However, the United States ranks as the country facing the worst economic losses. Seven of the ten disasters with the highest economic losses impacted the United States, with losses amounting to nearly 526 billion US dollars.

In Europe, floods, storms, and droughts triggered the worse economic losses, amounting to 111.5 billion US dollars. However, in terms of fatalities, the ten worst disasters were triggered by extreme temperature. Nearly 69,000 people lost their lives during the 2003 heatwave that impacted many countries in Europe.

The Atlas has a dedicated section on tropical cyclones and remarks that in the period between 1970 and 2019 there were 1,945 disasters triggered by such cyclones, killing nearly 780 thousand people. Economic losses due to these cyclones amounted to nearly 1.4 trillion US dollars. The Atlas notes that the Philippines is the country that experienced the highest number of disasters triggered by tropical cyclones, followed by China and then Japan. But in terms of economic losses, the United States tops the list, followed by Japan and then China.

More information on this Atlas is available here.

The Atlas can be downloaded here.