Fire in Canada, the International Charter on Space and Major Disasters activated 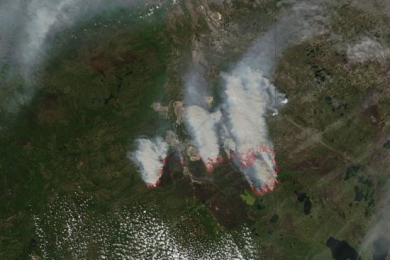 A destructive wildfire burned through Canada’s Northern Alberta region, destroying neighborhoods in Fort McMurray and displacing nearly 90,000 people.  The fire began on the 1st of May and the exact cause is still unknown. High temperatures and strong winds pushed it north-east two days later. Despite the work of more than 500 firefighters, by the 8th of May the fire had burnt 1,610 square kilometers of forest. By the 24th, the fire was still not extinguished but it had not grown either.

Thanks to the images captured by Landsat 8 – an Earth Observation satellite of the National Aeronautics and Space Administration (NASA) – some precise and relevant data had been sent to the local authorities to contribute to cope with the effects of this huge forest fire. Authorities of Fort McMurray –ordered the evacuation of about 2,400 buildings.

The International Charter on Space and Major Disasters was activated at the request of the Government Operations Centre (GOC) Public Safety Canada on the 4th of May 2016.  The Canadian Space Agency (CSA) was selected as project manager.

Satellites from NASA, ESA, EUIMETSAT and JAXA were also tasked to acquire satellite imagery to contribute to the elaboration of maps depicting hot spots and burnt areas between 08 May and the first days of June 2016.

Learn more about it on the following link: