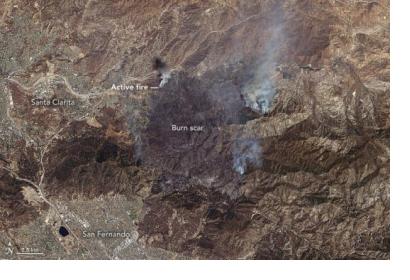 On the 22nd of July 2016 a fire occurred in southern California, United States. The Moderate Resolution Imaging Spectroradiometer (MODIS) on the Terra satellite from the National Aeronautics and Space Administration (NASA) acquired some images of the phenomenon during and after the burn.

On July 25th the fire burned more than 33,100 acres displacing people from more than 10,000 homes. Dozens of buildings have been destroyed in the nearby cities of Santa Clarita and San Fernando. The sand fire left a scorch dark mark on the landscape as visible on the picture.

2,900 firefighters from Los Angeles County and the U.S. Forest Service were requested to contain the fire which was controlled of up to 10 percent on the 25th of July.