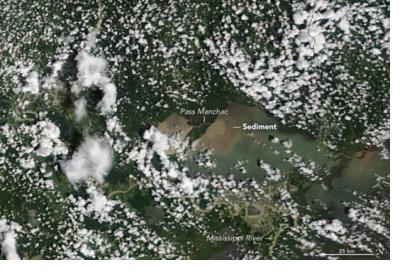 The Moderate Resolution Imaging Spectroradiometer (MODIS) on the Terra satellite of the National Aeronautics and Space Administration (NASA) captured a space image of sediments on 17 August 2016 in Lake Pontchartrain, located in the state of Louisiana, United-States.
Due to the heavy rainfall which affected Louisiana in August 2016, most of the rivers “crested at record-high levels” and some materials coming from Lake Maurepas via Pass Manchac were drained into Lake Pontchartrain.
Those brown sediments are picked up during the streaming of the rivers and are made out of mud, rock and minerals.
Sediment Pours into Lake Pontchartrain
Tue, 08/23/2016 - 00:09
United States of America