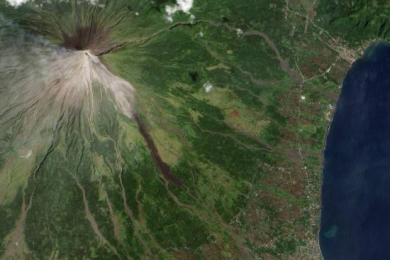 The International Charter Space and Major Disasters has been activated for volcanoes in the Philippines and Papua New Guinea. The activations have been requested by the Asian Disaster Reduction Center (ADRC), a UN-SPIDER Regional Support Office. In the Philippines, Mount Mayon, the country’s most active volcano, has been spewing lava since 13 January, leading to evacuations of over 40,000 residents from nearby villages. Authorities have has raised the alert level to four on a scale of five, indicating that an imminent eruption is expected within days, and expanded the exclusion zone to 8km around the volcano. The Japan Aerospace Exploration Agency (JAXA) acts as the project manager for this Charter activation. In Papua New Guinea, a long-dormant volcano on Kadovar island erupted again on 22 January, after the first eruptions earlier this month. Thousands of residents from the surrounding islands near the country’s northern coast have been evacuated. The project manager for this Charter activation is the Asian Institute of Technology (AIT).
Charter activations
Tue, 01/23/2018 - 14:54
Papua New Guinea
Philippines
Asian Disaster Reduction Center (ADRC)