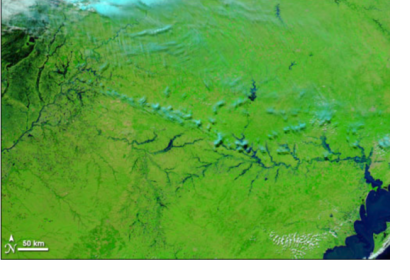 The International Charter “Space and Major Disasters” has been activated for floods in Brazil by the Brazilian Disaster and Risk Management National Centre (CENAD). The country’s Ministry of National Integration is acting as project manager for the activation.

Mudslides and floods triggered by sudden rain over the western area of the Brazilian state of Rio Grande do Sul have caused the Ibirapuita, Ibicui and Uruguai rivers to break their banks and cause widespread flooding.

The rains have swept away entire neighbourhoods in a mountainous tourist area near RioMetSul Meteorologia reported 497mm of rainfall in 72 hours in the state of Uruguaiana.

Over 2000 people have been displaced and moved to temporary accommodation as the floods damaged houses, blocked roads and water supplies were disrupted.

Local reports say the flooding peak in the city of Algrete was reached on 13 January, while the areas of Manoel Viana and Uruguaiana are set to peak on 14 January.

In response to the activation, the Charter will provide up-to-date satellite-based information products and maps to help mitigating the effects of the disaster.