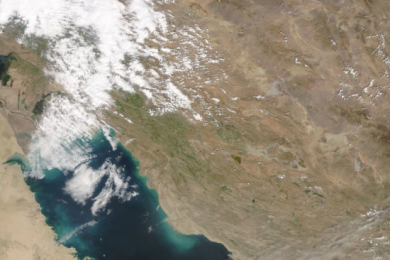 The United Nations Office for Outer Space Affairs (UNOOSA), as part of the support it provides to Member States through its UN-SPIDER programme, has requested the activation of the International Charter "Space and Major Disasters" for monitoring the impact of the floods in the Islamic Republic of Iran caused by heavy rainfall in the southwestern provinces of Golestan and Mazandaran on 31 March. The Charter was activated on behalf of UN-SPIDER Regional Support Office the Iranian Space Agency (ISA), which is acting as project manager for the activation.

A state of emergency has been declared by officials with at least 45 people killed and many more injured as flash flood water and mud damaged thousands of buildings and  more rainfall is expected in the coming days. Up to 56 villages near the Dez and Karkheh rivers may need to be evacuated as water needs to be released from two dams.Officials reported that in the next five days around three billion cubic meters of water will flow into dam reservoirs in Khuzestan some of which will also need to be released creating more flooding.

With 25 of 31 provinces experiencing floods or facing imminent threat, the country's National Crisis Management Committee was activated at cabinet level. Energy Minister Reza Ardakanian, who is in charge of water resources, said authorities were working round-the-clock to “control floodwaters and to minimize possible damage”. Rescue workers have been deployed to aid the worst affected, and the area remains at a state of high alert preparing for more storms.