UNDRR and UNCCD Launch the Special Report on Drought 2021 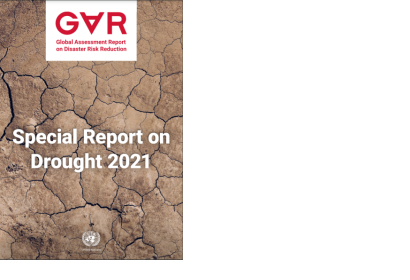 Droughts have extensive and profound repercussions on populations, livelihoods, ecosystems, and economies. The most vulnerable people are unduly affected by their financial consequences. Although droughts affect millions, lead to food shortages, poverty, and inequality, their immense and widespread effects are often underreported.

Climate change is aggravating the intensity, duration, and prevalence of droughts globally through rising temperatures and disturbances of rainfall patterns. Within the next 80 years, climate change will be the primary cause of the increased drought exposure of 129 countries (Smirnov et al., 2016). As global temperatures rise due to climate change, pressing action is needed to manage the risks related to droughts, and to diminish their destructive impact on human lives, livelihoods, and ecosystems.

On 17 June 2021, the United Nations Convention to Combat Desertification (UNCCD) celebrated the Desertification and Drought Day 2021.  The event was used by the United Nations Office for Disaster Risk Reduction (UNDRR) and UNCCD to launch the Special Report on Drought 2021. The report examines the systemic character of droughts, its effects and consequences for human lives, health, and ecosystems. The report calls for urgent action to reduce drought risks, as advanced and preventive action carry far fewer costs than reaction and response to post-drought consequences.