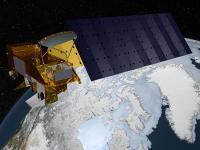 Aqua, Latin for water, is a NASA Earth Science satellite mission named for the large amount of information that the mission is collecting about the Earth's water cycle. The Aqua mission is a part of the NASA-centered international Earth Observin System (EOS). Aqua was formerly named EOS PM, signifying its afternoon equatorial crossing time.
Aqua was launched on May 4, 2002, and has six Earth-observing instruments on board, collecting a variety of global data sets. Aqua was originally developed for a six-year design life but has now far exceeded that original goal and is expected to be operating into successfully into the early 2020s. It continues transmitting high-quality data from four of its six instruments, AIRS, AMSU, CERES, and MODIS, and reduced quality data from a fifth instrument, AMSR-E. The sixth Aqua instrument, HSB, collected approximately nine months of high quality data but failed in February 2003.