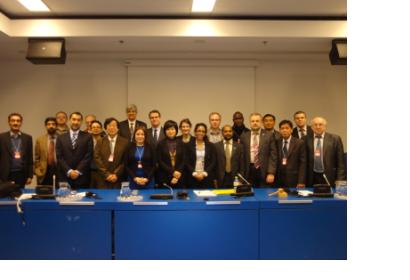 UN-SPIDER inaugurated on 11 February 2013 its 4th Annual meeting of Regional Support Offices (RSOs) on the premises of the United Nations Office in Vienna, Austria. The meeting is a side event of the annual session of the Scientific and Technical Sub Committee of the Committee on Peaceful Uses of Outer Space (COPUOS) taking place from 11-22 February 2013. The meeting's participants included representatives from eleven of the thirteen RSOs and representatives of agencies from Russia, Indonesia and Nepal.

In his welcoming remarks, Mr. Takao Doi, Chief of Space Applications, highlighted the need for RSOs to define their role more clearly in the context of the UN-SPIDER programme, to sustain efforts to achieve the goals established in UN-SPIDER's plan of work and to discuss potential opportunities for cooperation when considering the Universal Access modality that the International Charter: Space and Major Disasters has recently established.

This annual meeting provided the RSOs an opportunity:

The two-day meeting included an official signing ceremony of a new RSO agreements between UNOOSA and ICIMOD in Nepal.

Outcomes of the RSO meeting include:

Last but not least: The RSOs are invaluable for the success of UN-SPIDER. The UN-SPIDER team would like to take the opportunity to thank you all for this productive meeting and for your continuous support!