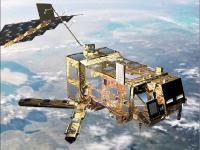 METOP (Meteorological Operational) is Europe's first polar-orbiting operational meteorological satellite. It is the European contribution to the Initial Joint Polar System (IJPS), a co-operative agreement between Eumetsat and the US National Oceanic and Atmospheric Administration (NOAA) to provide data for climate and environmental monitoring and improved weather forecasting. The first MetOp-A satellite was launched in 2006, with the other two following at five-year intervals. In total, the programmes will be operational for at least 14 years.
Launched in October 2006, MetOp-A, the first satellite in the series of three, replaced one of two satellite services operated by NOAA and is Europe’s first polar-orbiting satellite dedicated to operational meteorology. Once operational in orbit, responsibilities for the meteorological satellite services have been shared between the USA and Europe.
The MetOp satellites are designed to work in conjunction with the NOAA satellite system, flying in complementary orbits. MetOp's polar orbit is Sun synchronous, so that the satellite track along the Earth is always at the same local time, in this case in the mid-morning. NOAA still continues to operate its mid-afternoon orbit satellite service as part of the Polar Orbit Enviromental Satellites (POES) system.