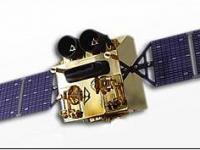 Gaofen-1 (gao fen = high resolution) is the first of a series of high-resolution optical Earth observation satellites of CNSA (China National Space Administration), Beijing, China. The civilian HDEOS (High-Definition Earth Observation Satellite) program was proposed in 2006, it received government approval and was initiated in 2010. China plans to launch six HDEOS spacecraft between 2013 and 2016. The major users of the observation data will be the Ministry of Land and Resources, Ministry of Environmental Protection, and the Ministry of Agriculture.
The GF-1 spacecraft was launched on April 26, 2013 on a CZ-2D (Long March -2D) vehicle from the JSLC (Jiuquan Satellite Launch Center) in northwest China.