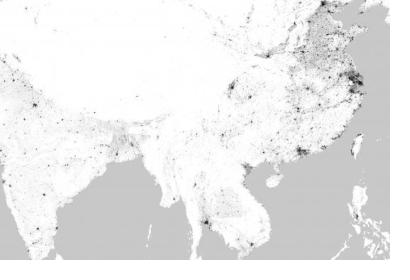 A new world map developed by the German Aerospace Centre (DLR) reveals settlement structures on Earth in 2015 with a resolution of 10 metres. The World Settlement Footprint 2015 (WSF2015), which is publicly and freely available, combines optical and radar satellite imagery acquired by the Landsat-8 and Sentinel 1 missions in 2014 and 2015 to outline the extent of settlements at a high accuracy.

Information about human presence is relevant to a number of use cases in disaster risk management, for instance when estimating exposure to natural hazards in risk mapping. It is also critical for assessing the impact of a disaster on the population. A UN-SPIDER Data Application of the Month provides further details and presents a wide range of available population and settlement data products.

The publication of WSF2015 follows the release of the Global Urban Footprint (GUF) in 2016, which was generated at a resolution of 12 metres using radar satellite imagery acquired by the TerraSAR-X and TanDEM-X missions between 2011 and 2013. The quality of WSF2015 has been assessed in collaboration with Google and using around 900.000 ground-truth samples that had been labelled through crowd-sourced photointerpretation.

WSF2015 can be downloaded from a dedicated repository; resampled versions at 100 metres, 250 metres, 500 metres, one kilometre and 10 kilometres are also available.