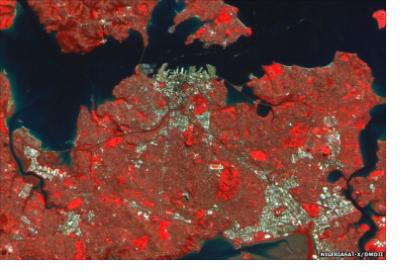 Nigeria's latest Earth observation satellites have returned their first pictures. The spacecraft, launched on 17 August, give the African nation a powerful new capability to map its own lands and other parts of the globe. NigeriaSat-2 and NigeriaSat-X will also assist the Disaster Monitoring Constellation. This UK-managed fleet of spacecraft is used to picture regions of the Earth gripped by natural calamities. These might be catastrophic floods or a big earthquake. Images sent down from space will often be critical to organising an effective emergency response.

The first picture released from the Nigerian pair is of New Zealand's biggest city, Auckland. It was acquired by NigeriaSat-X, and reveals the buildings and the landscape surrounding this major urban centre. It is just possible to see the wakes of ships passing under the harbour bridge that joins downtown Auckland with North Shore City. The satellite is equipped with a multi-spectral imager for general mapping, agricultural monitoring and disaster relief work. The resolution in this picture is 22m per pixel. Vegetation is picked out in red.

Both NigeriaSat-X and NigeriaSat-2 were designed and built by Surrey Satellite Technology Limited (SSTL) in Guildford, UK. What is interesting about NigeriaSat-X is that the work was undertaken by Nigerian engineers themselves. The skills they have learnt will now be taken home so that they can build future spacecraft in their own country. It is a model previously followed by Turkey. Its engineers received their education at SSTL as well, and the same rocket that launched the Nigerian platforms also launched Rasat. This remote sensing satellite (7.5m resolution) is the first to have been developed and manufactured in Turkey by Turkish engineers.

SSTL Executive Chairman, Sir Martin Sweeting, commented: "NigeriaSat-X is the product of Nigeria's training and development programme here at Surrey. "It is a great credit to NASRDA (National Space Research and Development Agency) and their engineers that this satellite is performing well and its operations are progressing so quickly. "These highly skilled engineers will not only help Nigeria to manage its resources, but also bootstrap its fledgling high-tech economy alongside a growing nucleus of highly trained people."

A first picture should be released from NigeriaSat-2 in the coming days. This is a much more powerful platform, able to resolve details on the Earth's surface just 2.5m across. Few countries in the world have access to such a capability.