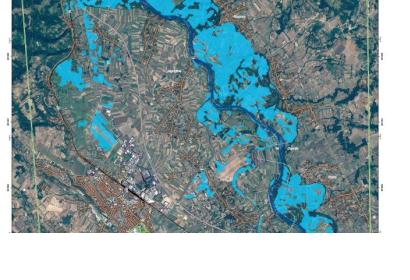 The Emergency Mapping Service of the European Union's Copernicus programme was activated to provide satellite-based maps of the severe floods in Croatia, Bosnia and Herzegovina, and Serbia.

The service produced four maps for Croatia, 18 maps for Bosnia and Herzegovina, and 20 maps of Serbia.

NASA's Earth Observatory has also published a satellite image of the floods in Croatia, Serbia, and Bosnia and Herzegovina on May 19, 2014. By comparing the current image to an image from 18 May 2013, the massive extent of the floods becomes clearly visible.

Due to heavy rains and widespread flooding, the Serbia declared a State of Emergency for the whole territory of the Republic. The most seriously affected regions are Kolubara, Mačva and Morava. Critical infrastructure systems are severely affected in several parts of the country, including railway traffic between Belgrade and Nis. In Croatia, severe flooding and unexpectedly fast rising of the water level occured in Slavonija region in east Croatia, near the Bosnian border.

Following the international response to the flood events in the Balkans, UN-SPIDER compiled a list of available satellite imagery and maps of the flooded areas.