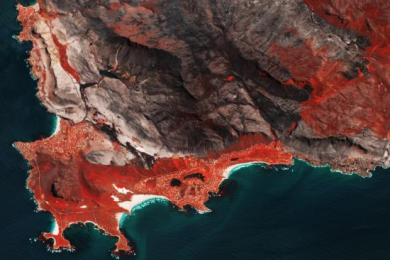 Using imagery of the Copernicus Sentinel-2 satellite, researchers from Spain, the United Kingdom and Germany have discovered that more areas in Sub-Saharan Africa are affected by wildfire than previously estimated. In their open-access paper, published in the journal Remote Sensing of Environment, the researchers delineate how they created the first detailed continental map of burnt areas caused by wildfires for 2016.

Specific satellites, such as Sentinel-2, are used to detect disasters like wildfires and map their spreading in order to support relief efforts. Afterwards, the satellites images are used to monitor the traces the fires left behind, especially in remote regions.

Sub-Saharan Africa was picked because it holds approximately 70% of the globally burnt areas and thus is ideal to evaluate the potential for improving the understanding of the worldwide impacts of fire. Within the chosen time period two half fire seasons took place on the Northern Hemisphere and an entire fire season on the Southern Hemisphere.

The high-resolution images from Sentinel-2 show that 4.9 million km² were burnt, 80% more than the NASA algorithm MCD64A1 registered in the same time frame using lower-resolution imagery. The algorithm developed includes small fires on less than 100 ha in all of the 25 million km² region. It is the first time a continental product for burnt areas was generated from medium resolution sensors with a spatial resolution of 20 meters.  As a result, according to the researchers, the study highlights the potential of these sensors “for improving our current understanding of global fire impacts”.

Besides causing vast devastation in countrysides, wildfires produce between 25 and 35 percent of the annual greenhouse gases emitted into the atmosphere. Small fires, such as the ones included in the algorithm, are usually not as destructive as large fires, but are set to change the use of land by clearing it for grazing or agriculture. Nevertheless, as lead author Ekhi Roteta states, their impact on greenhouse gases may be underrepresented and “suggests an increase in the contribution to greenhouse gas emissions. It would therefore be useful to include these data in existing climate models.”

The research and data product was conducted within the framework of ESA’s Fire Climate Change Initiative (Fire_cci) which aims to meet  requirements for satellite-based products for climate observation. The dataset covering small fires is available in open access.