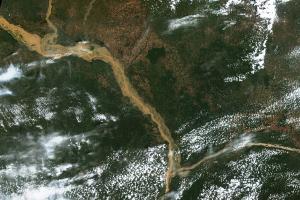 Heavy rains since the onset of the rainy season in July have caused extensive floods in Nigeria, especially along the Niger river. The floods have led to destruction of shelters, which has driven displacement inside the country.

Upon the request of the National Emergency Management Agency (NEMA), UN-SPIDER and its Regional Support Office in Nigeria, the National Space Research and Development Agency (NASRDA), have produced maps outlining the extent of the floods in different areas along the Niger river between Sarafu in the North and Yenegoa in the Niger Delta. The maps were produced using the UN-SPIDER Recommended Practices on flood mapping with Sentinel-1 radar imagery in Google Earth Engine as well as in SNAP and QGIS.