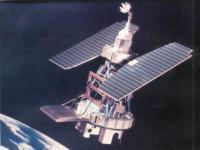 Landsat 1 was launched on July 23, 1972; at that time the satellite was known as the Earth Resources Technology Satellite (ERTS). It was the first Earth-observing satellite to be launched with the express intent to study and monitor our planet’s landmasses. To perform the monitoring, Landsat 1 carried two instruments: a camera system built by the Radio Corporation of America (RCA) called the Return Beam Vidicon (RBV), and the Multispectral Scanner (MSS) built by the Hughes Aircraft Company. The RBV was supposed to be the prime instrument, but the MSS data were found to be superior. In addition, the RBV instrument was the source of an electrical transient that caused the satellite to briefly lose altitude control, according to the Landsat 1 Program Manager, Stan Weiland.
To help understand the data and to explore the potential applications of this new technology, NASA oversaw 300 private research investigators. Nearly one third of these were international scientists. These researchers came from a wide array of Earth science disciplines. They evaluated the usefulness of Landsat data to their respective fields.
Landsat 1 operated until January 1978, outliving its design life by five years. The quality and impact of the resulting information exceeded all expectations.