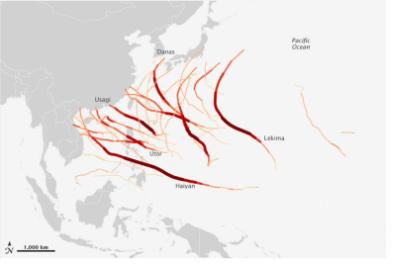 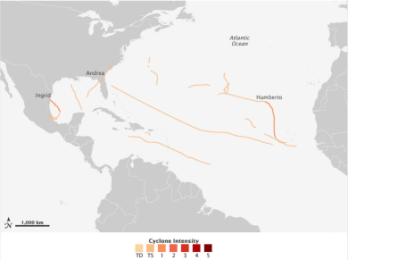 New maps posted on the NASA Earth observatory website show the tracks and intensity of the tropical storms in both basins this year.

In the Atlantic occurred just 13 tropical storms, none of them developed to major hurricanes, for the first time since 1994. It was one of the least active seasons of the last 60 years. The strong outbreaks of dry and stable air that originated over Africa could be a good explanation for this low activity.

In the Western pacific in 2013 different agencies noted between 28 and 31 tropical storms and from 13 to 16 typhoons – six of them reached super typhoon strength. The season this year was close to the most active one in 1964 with 39 tropical storms.

Nearly 30% of world’s tropical storms build in this region. The trend for the cyclones is to get larger and more intense while crossing the Pacific. The Philippines suffered most damages and losses. The islands were hit several times this year, including by the strongest typhoon of the season Haiyan.