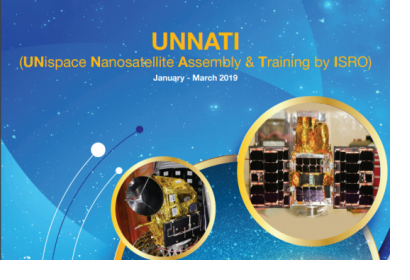 The Indian Space Research Organisation (ISRO) has launched a new programme to offer educational training in space technology to engineering and science graduates. The application period for the first round of the UNispace Nanosatellite Assembly & Training (UNNATI) will close on 30 September. Further rounds are foreseen in 2019 and 2020.

The selected candidates will acquire knowledge about nanosatellites development through a combination of theoretical coursework and hands-on training on Assembly, Integration, and Testing (AIT).

Through the programme, ISRO aims at building capacities in satellite technology for participants from countries interested in developing space programme.

The UNispace Nanosatellite Assembly & Training  (UNNATI) will take place in Bangalore, India. The training will be offered to 30 candidates from 15 countries.

Details of the programme including application form are available at www.isro. gov.in/unnati.

During the 54th session of the Scientific and Technical Subcommittee of the Committee on the Peaceful Uses of Outer Space in Vienna in February 2017, the United Nations Office for Outer Space Affairs requested Member States to propose new initiatives for UNISPACE+50. India suggested to convene a capacity-building programme on small satellites through a combination of theoretical coursework and hands on training on Assembly, Integration and Testing (AIT). UNNATI was officially announced during in June 2018 at UNISPACE+50, an event marking the 50th anniversary of the first United Nations Conference on the Exploration and Peaceful Uses of Outer Space.