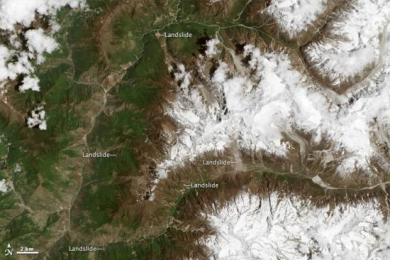 A team of international volunteers is combing through satellite imagery of the earthquake-affected areas in Nepal to identify additional hazards like earthquake-induced landslides. “Landslides are a common secondary hazard triggered by earthquakes or rainfall,” said Dalia Kirschbaum, a remote sensing scientist at NASA’s Goddard Space Flight Center and a leader of a landslide mapping effort. “Because landslides can mobilize and move so quickly, they often cause more damage than people realize.“

Different subgroups have also focused on disaster mapping, measurement and assessment, hazard impact, or communications. Some teams create damage proxy maps that tell the type and extent of the existing damage; others create vulnerability maps that show potential risks.

Data sources include the Landsat satellites, the Earth Observing-1 satellite, the Advanced Spaceborne Thermal Emission and Reflection Radiometer (ASTER) instrument on the Terra satellite, the WorldView and GeoEye satellites operated by Digital Globe, and image mosaics and topographic information accessible in Google Earth.

Mapping landslides is especially important because of the impending monsoon season in Nepal where the highest number of landslides occur. The collaborators provided information that Nepalese government, military, and scientific entities could use to make informed decisions about evacuations and relief support.

The mapping effort will have a long-term benefit, as well. “How can we better understand landslide processes scientifically,” Kirschbaum asked, “and then how can we use models, weather forecasts, and other tools to help government and science entities protect citizens?”