The UN and Disaster Risk Management 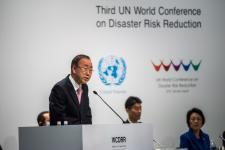 The United Nations designated the period between 1990-1999 as the International Decade for Natural Disaster Reduction (IDNDR). Under the umbrella of IDNDR, experts from many fields began to shape the global framework for disaster risks and their management. Of particular relevance was the introduction of several concepts related to disaster-risk, including hazard, vulnerability, exposure, and risk; as well as the need to reduce disaster-risks for a more sustainable development of communities worldwide. Many organizations of the United Nations system carried out a variety of efforts and activities under the auspices of this Decade.

In January 2005, the UN Office for Disaster Risk Reduction (UNDRR) and the Government of Japan hosted the World Conference on Disaster Reduction (WCDR) in Kobe, Japan. The outcome of this conference was the Hyogo Framework for Action (HFA). This framework, endorsed by 168 Member States, marked a milestone in catalyzing national and local efforts to reduce disaster risk, all the while strengthening international cooperation through the development of regional strategies, plans and policies. It also marked the creation of global and regional platforms for disaster risk reduction.

In March 2015, the Sendai Framework for disaster risk reduction was adopted during the Third UN Conference on Disaster Risk Reduction. The Sendai Framework is the successor to the HFA and will steer efforts at the local, national, regional and international levels between 2015 and 2030. It is structured in a similar fashion to the HFA, providing guidance to local and national institutions and stakeholders on key priorities for action, and includes guidance to regional and international organizations on how to contribute in these efforts.

The Sendai Framework has been established with the aim of substantially reducing disaster risk and losses: in lives, livelihoods, health and in the economic, physical, social, cultural and environmental assets of persons, businesses, communities and countries. The framework includes four priorities for action and seven global targets. More information on the Sendai Framework can be found here.

Under the guidelines of the Committee on Peaceful Uses of Outer Space (COPUOS), the United Nations Office for Outer Space Affairs (UNOOSA) established the United Nations Platform for Space-based Information Disaster Management and Emergency Response (UN-SPIDER) in 2006, with the aim of promoting the use of space-based information in all phases of the disaster management cycle- in all regions of the world. UN-SPIDER was active in under the umbrella of the Hyogo Framework for Action and has continued its efforts under the Sendai Framework. UN-SPIDER works with its network of Regional Support Offices (RSO) and other partners to support countries in the use of space-based information and technologies in Priority Areas 1 and 4 of the Sendai Framework, and also promotes the use of space-based data in the indicators that will be used to track efforts leading to the achievement of the seven targets.

GP-STAR brochure: Overview of Space-based Technology Applications to Support the Implementation of the Sendai Framework

Newsletter: UN-SPIDER’s Engagement in Promoting Science and Technology in the Implementation of the Sendai Framework