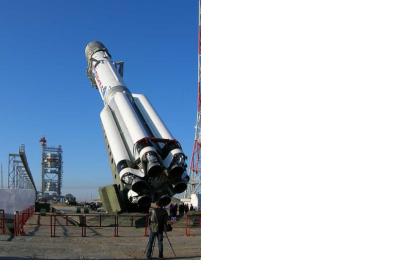 On 8 December 2013, the Inmarsat-5F1 (I-5 F1) telecommunications satellite of the British Inmarsat global mobile operator was launched from Baikonur in Kazakhstan at 12:12 GMT by the International Launch Services (ILS) Proton-M main booster. The Inmarsat-5F1 was launched according to the already tested method of orbiting the satellite: In a first stage the rocket Proton-M put the upper stage rocket Breeze-M onto a suborbital trajectory carrying the telecommunications satellite. The Breeze-M upper stage carries the Inmarsat-5F1 to the designated orbit, where the satellite shifts to its geostationary orbit by means of its engine to assume it's position, and detaches then from the upper stage rocket around 15 and a half hours after the launch.

The British telecommunications satellite Inmarsat-5F1 was manufactured by the U.S. company Boeing Satellite Systems for the British satellite communications operator Inmarsat Plc. I-5 F1 is the first of three Inmarsat next-generation Global Xpress® satellites scheduled to launch before the end of 2014, which will be the first globally available high-speed broadband Ka-band network. The launch vehicle, Proton-M, includes improvements regarding the rocket Proton-K such as better energy-mass, operational and ecological features.

The Inmarsat-5F1 is expected to settle into its designated orbit on the morning of 9 December after separating from the Breeze-M upper booster. According to the Khrunichev company that developed the Proton and Breeze systems, the detached booster will immediately be deactivated to prepare it for safe dead orbiting.