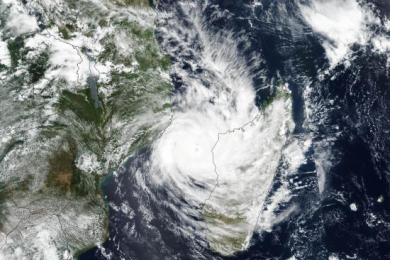 The United Nations Office for Outer Space Affairs (UNOOSA), as part of the support it provides to Member States through its UN-SPIDER programme, has requested the activation of the International Charter "Space and Major Disasters" for monitoring the impact of Cyclone Idai in Zimbabwe, which hit the country's eastern provinces on 15 and 16 March. The Charter was activated on behalf of the United Nations Development Programme (UNDP) Zimbabwe country office.

Following its landfall in Mozambique on 14 March, Cyclone Idai continued across land with heavy rains and strong winds that led to riverine and flash flooding in Zimbabwe's Chimanimani and Chipinge districts, the worst-affected areas. Areas within the pathway of Cyclone Idai’s weather system include Manicaland, Mashonaland East, Mashonaland Central, Mashonaland West, and parts of Masvingo and Midlands provinces, according to the Metrological Services Department. Its effects are also projected to be felt in Harare Metropolitan and the Matabeleland provinces.

The President of Zimbabwe has declared the impact of Cyclone Idai a state of disaster.