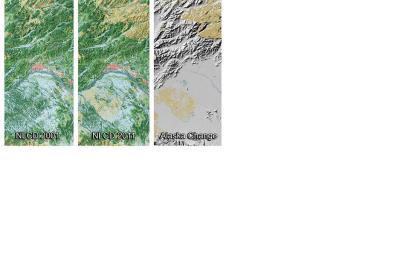 The U.S. Geological Survey (USGS) has released a new dataset for land cover in Alaska; it is publicly available and covers ten years. Based on Landsat satellite imagery taken in 2011, the data describe the land cover of each 30-meter cell of land in Alaska and identifies which ones have changed since the year 2001.

USGS elaborates on their website: "The extensive National Land Cover Dataset continues to add to our understanding of where land cover change has occurred across the Nation over time. Derived from carefully calibrated, long-term observations of Landsat satellites, NLCD data are used for thousands of applications such as best practices in land management, indications of climate change, determining ecosystem status and health, and assessing spatial patterns of biodiversity."

"Recognizing that ​land cover is ​changing ​rapidl​y​ in the high latitudes of the Arctic, it is vital that we have the clearest view of ​the spatial and temporal patterns associated with those changes,” said Suzette Kimball, acting Director of the U.S. Geological Survey. “As the Arctic becomes more accessible to human endeavors, understanding changes in land cover becomes critical in both using and preserving Alaska’s precious resources."