In Detail: How to measure SFDRR target B5 - estimation of the number of people affected by drought in Eastern Cape, South Africa

The workflow of Part A and B by ZFL guides the user through the different steps of the drought hazard assessment in R Studio and TIMESAT soft wares. First, the MODIS13Q1 Enhanced Vegetation Index (EVI) satellite data with a temporal resolution of 16 days and a spatial resolution of 250m are downloaded. After the quality masking, the Vegetation Condition Index (VCI) is computed, which represents the percentage of EVI regarding its maximum amplitude of the whole time series at a certain day of the year. Third, seasonal phenological metrics such as the Start of Season (SoS), Peak of Season (PoS) and the End of Season (EoS) are computed for each pixel in TIMESAT. The phenological metrics are used to determine time blocks which are used in a weighted linear combination to average the VCI. Thus, the modified EVI considers the different crop growing stages and vulnerabilities. The outputs of Part A and B are annual drought hazard maps which distinguish three classes: not affected, damaged and destroyed crop and grassland.

The workflow of Part C and D by UNU-EHS uses the output from Part A and B for the year 2015/2016 and combines it with land-use, agricultural and census data. First, the hectares of affected crop and grassland per local municipality are extracted. In this practice, grassland is used as a proxy for affected livestock. The agricultural census data differentiates between farmers working in the livestock and crop sector. Thus, via the densities of agriculture-dependent people (regarding the livestock and crop sectors) per municipality, the number of people affected per hazard class can be estimated. Eventually, the two datasets are combined to estimate the total number of people affected by agricultural drought (B5a+B5b).

All data which is required will be downloaded by either running the script or it is explained where and how to download it in the Step-by-Step descriptions. Thus, the list below is only an overview.

For image processing and further calculations:

In terms of computing power, a strong machine is recommended for faster processing, although the R script was written in a way that allows calculations on non-high-end machines as well (plan for the calculations to take some days in case you are using a weak machine). The following recommendations are minimum (and tested) specifications:

This practice was specifically developed for the South African context. Hence, the transferability to other countries and contexts is not failsafe. This section briefly discusses strength and limitations of the workflow, both Part A and B provided by ZFL and Part C and D provided by UNU-EHS. Nonetheless, this list is not extensive and only provides an overview of considerations regarding the usability of the workflows. 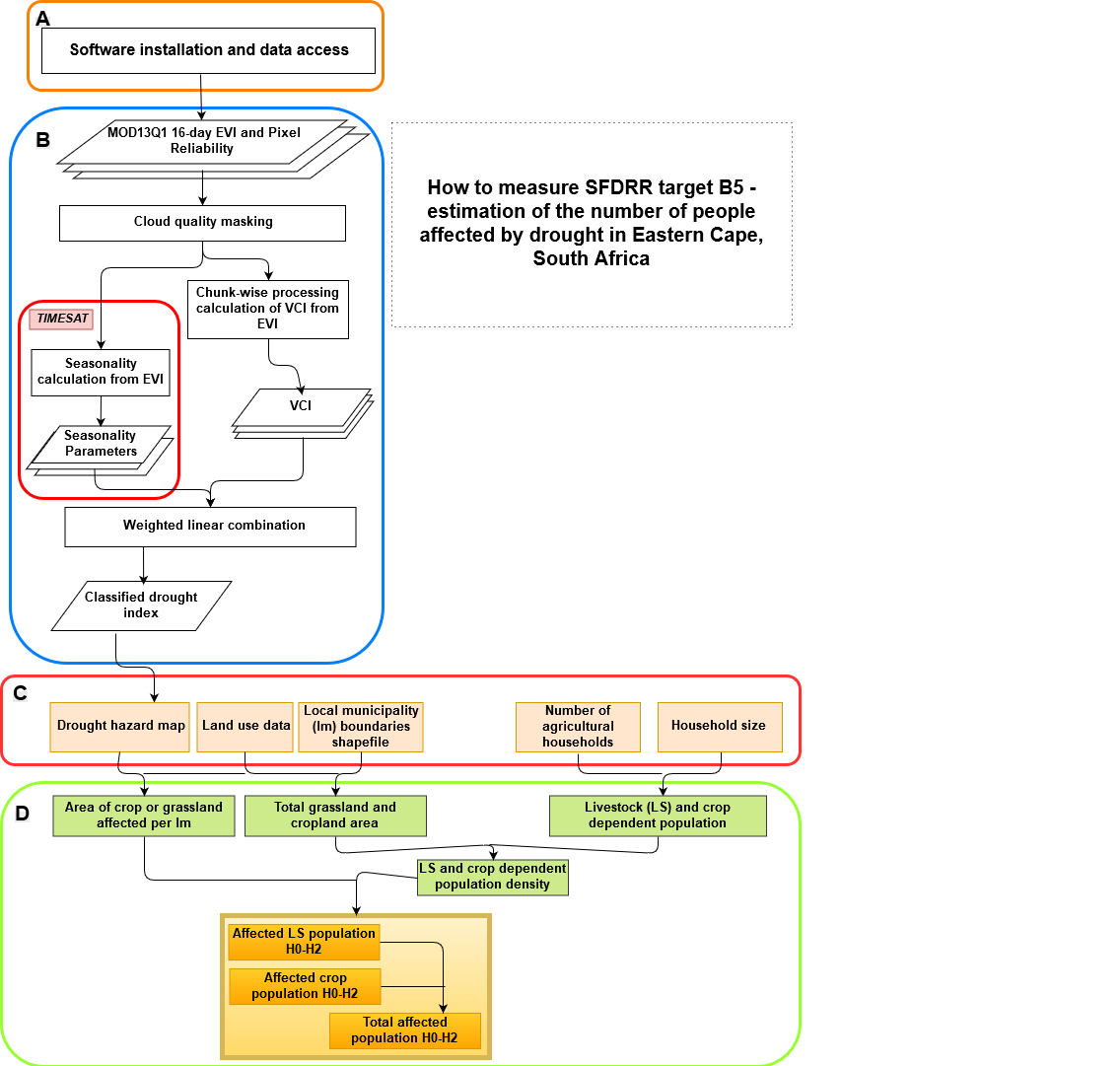