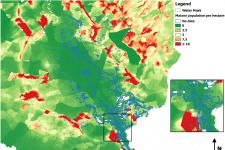 Mapping the extent of a natural hazard (e.g., assessing areas with a high risk) or disaster is a first step in disaster risk management and emergency response. Subsequently, exposure mapping enables the estimation of the impact of hazards or disasters, for example, regarding the number of affected inhabitants or infrastructure. The following practice shows the use of Quantum GIS to analyze a disaster extent map in combination with auxiliary data such as population or land cover data.
Step by Step Exposure
In Detail Exposure
The objective of this practice is to estimate the exposure of a natural hazard or disaster. As an example, the number of inhabitants affected by a flood event is estimated. The joint use of the flood mask, created by the Recommended Practice: Flood Mapping, and the WorldPop data set constitutes a viable solution to quickly estimate the impact of the flood regarding the population. The proposed methodology is a universal practice which combines a simple approach based on open-source software and free of charge data together with a beforehand created map covering the extend of a natural hazard or disaster.
Mitigation
Preparedness
Recovery & Reconstruction
Relief & Response
Malawi
The practice was applied in the context of the flood event in Malawi in January 2015. Since December 2014, heavy rains affected Malawi causing rivers to overflow. The flooded area in this analysis covered a part of the Nsanje district around Chiromo.

This practice can be applied globally. Besides of the beforehand created hazard or disaster extent map, the practice does not need specific near real-time data as it is based on population, land cover, or other auxiliary geodata archives. The WorldPop data set provides population data for Africa, Asia as well as Central and South America with a spatial resolution of 100 meters. The Landcover30 data base provides global landcover data with a spatial resolution of about 30 meters.