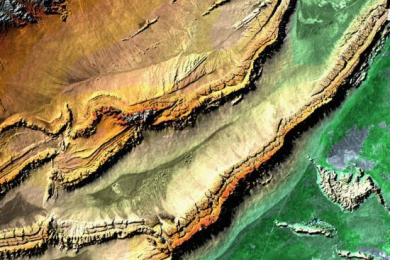 Three-dimensional (3D) representations of the Earth’s surface are essential for mapping and assessing disaster risks as well as for preparing, responding to, and preventing disasters. A Digital Elevation Model (DEM) is a pixel-based modeled representation of the Earth’s surface, where each pixel represents an elevation value. Computers or algorithms can use a DEM as input to model or analyze 3D topography. The Copernicus DEM is an edited Digital Surface Model (DSM) which represents the surface of the Earth including buildings, infrastructure and vegetation. Initially published in 2019, a higher resolution version of the Copernicus DEM has now been released for public access. With a 30 meter resolution, the Copernicus DEM GLO-30, provides more detailed topographic data. It is now openly available to any registered user, in addition to the Copernicus DEM GLO-90 from December 2019, which has a global coverage at 90 meter resolution.

High-resolution DEMs are vital tools for mapping and for modelling natural hazards and risks that are influenced by topography. In particular, they help to identify potential risk areas for coastal erosion, storm and tidal surges, floods and landslides. Their elevation information can be used to model the flow of water and to determine possible inundation areas in the case of floods. It helps to foresee where floods will create inaccessible areas and health risks (e.g., cholera). Furthermore, DEMs give important data for calculating wildfire risks as elevation influences the spreading of wildfires. Fire models assume that fire propagation speed increases upslope. Finally, 3D Lidar data derived from DEMs help to identify structural building damage which may be not visible in aerial or satellite imagery. This is especially critical in the case of earthquakes, where “pancaked” building failures or completely flattened buildings seemingly look intact from above. Recognizing structural building damage however is vital for appropriate disaster response.

The Copernicus DEM is based on the WorldDEM data acquired during the TanDEM-X Mission, which started in 2010 and was funded by a Public Private Partnership between Germany, represented by the German Aerospace Centre (DLR), and Airbus Defence and Space. The primary goal of the TanDEM-X Mission was to generate a worldwide, consistent and high-precision DSM based on Synthetic Aperture Radar (SAR) interferometry. Its data are of unprecedented geographical range, covering the entire global landmass including Antarctica and arctic regions. The Copernicus DEM not only presents terrain structures, flattened water bodies, the consistent flow of rivers, shore- and coastlines but also vegetation and buildings, including special features such as airports. Its three different instances, named EEA-10, GLO-30 and GLO-90, have varying geographical extent (European and global) and varying format (INSPIRE, DGED, DTED) as well as varying resolution (0.3 to 3.0. arc seconds). Access to the model can be gained free of charge by registered users of the Copernicus Open Access Hub.