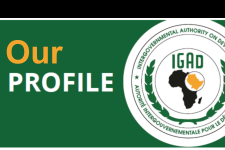 Somalia, Sudan and Uganda formed the Intergovernmental Authority on Drought and Development (IGADD) to mitigate against the effects of recurring droughts and other natural disasters. To operationalize IGADD, in 1989, Eastern and Southern Africa joined hands bringing together 24 countries to establish a Drought Monitoring Centre with its headquarters in Nairobi (DMCN) and a Sub-Centre in Harare, the Drought Monitoring Centre-Harare (DMCH) in response to the devastating weather related disasters. In 1996 Intergovernmental Authority on Development (IGAD) was formed to supersede IGADD.