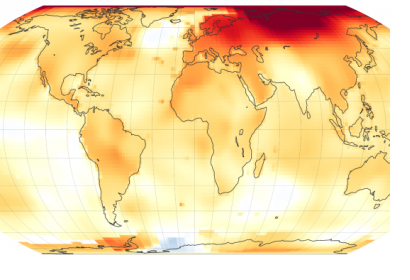 At 1.02 degrees Celsius higher than the 1951–1980 mean, Earth’s global average surface temperature in 2020 was – tied with that in 2016 – the warmest on record. This finding of a recent report by the National Aeronautics and Space Administration (NASA) underlines the planet’s long-term warming trend as one of the most significant effects of climate change. “The last seven years have been the warmest seven years on record, typifying the ongoing and dramatic warming trend,” said NASA GISS Director Gavin Schmidt. “Whether one year is a record or not is not really that important; the important things are long-term trends. With these trends, and as the human impact on the climate increases, we have to expect that records will continue to be broken.” The rising average temperatures cause various significant changes in weather, ice and land mass, sea levels and soil conditions – only to mention a few impacts. They also increase the likelihood and magnitude of extreme weather events. 2020 was not only the warmest year on record but also a year with record breaking natural phenomena.

Parts of Earth are warming faster than others. The most extreme temperature deviations have been measured in the Arctic, the region has been warming more than three times faster than the rest of the globe over the past 30 years. Last year was the hottest year on record in Europe. In general, the northern hemisphere had above average temperatures in contrast to the southern hemisphere with below average temperatures. This was caused by the cooling La Niña-conditions in the Pacific. The analysis of satellite data shows that in 2020 the CO2-concentration in the atmosphere continued to rise to an unprecedented level of 413.1 ppm. The estimated mean annual XCO2 growth rate of 2020 was 2.3 ± 0.4 ppm/year, in comparison to 2019 which had a higher growth rate of 2,5 ± 0,2 ppm/year. In the context of the Covid-19 pandemic there have been 7 per cent less CO2 emissions from fossil fuels. To what extent this was a factor in the lower overall increase is questionable, since the fluctuations in the global growth rate are dominated by natural processes.

Rising temperatures influence the likelihood and magnitude of disasters. Climate change increases the possibility of more severe droughts and favors the formation of storms as it drives ocean warming. Experts expect an increase in violent storms in the future. Weak storms, on the other hand, are becoming rarer. In addition to the higher intensity, the storms move more slowly. The speed of storms fell by an average of ten percent between 1949 and 2019. The reason for this lies in the slower circulation of the tropical atmosphere due to global warming. Temperatures rising due to greenhouse gases which trap more heat in the atmosphere speed up the melting of glaciers, sea ice in the Arctic as well as permafrost causing sea levels to rise and threatening coastal communities and estuarine ecosystems.

2020 in Statistical Tie for Warmest Year on Record. Image: NASA

Tracking global temperature trends provides a critical indicator of the impact of human activities, specifically greenhouse gas emissions, on our planet. The effects of rising temperatures on the quantity and severeness of natural disaster shows the importance of climate friendly action. UN-SPIDER connects the disaster management officials with the potential of the space community. Space technology is vital for tracking the climate and for early warning and effective response in cases of natural disasters.