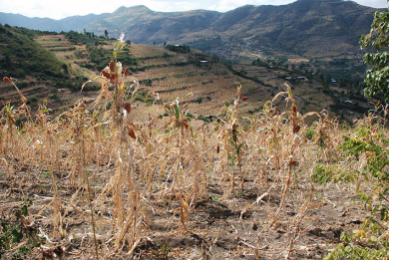 In recent years, droughts have been impacting several regions of the world on a more frequent and severe basis. The long-lasting effects of such droughts are taking a toll on farmers and their livelihoods, forcing some of them to seek alternate sources of income through migration to cities in their countries and in other countries in extreme cases. The World Meteorological Organization identifies droughts as the most damaging natural hazard due to their long-term socio-economic impact. According to the Food and Agriculture Organization of the United Nations (FAO), droughts are the “single greatest culprit of agricultural production loss”.

A drought generally refers to “an extended period of unusually low precipitation that produces a shortage of water for people, animals and plants”. Specifically, an agricultural drought occurs when “soil moisture availability to plants has dropped to such a level that it adversely affects the crop yield and hence agricultural profitability”. Droughts develop at a slower pace than other natural hazards and their onset is “difficult to identify”. As a result, drought risk management around the world is oftentimes reactive in nature. Still, the risks that stem from droughts can have devastating effects on the health and economies of communities and the environment.

The use of Earth observation (EO) data is essential for monitoring droughts and managing their risks. EO data provides valuable measurements which are necessary to facilitate drought early detection and, in doing so, supports drought risk management. EO is also used to monitor precipitation levels, soil moisture and vegetation health on the ground to facilitate drought early detection and, in doing so, mitigates the risk of crop loss, famines and fires. Challenging droughts and their risks through the use of EO data is therefore indispensable in order to contribute to sustainable development and support disaster management. For this purpose, FAO developed the global Agricultural Stress Index System (ASIS) with the aim to facilitate agricultural drought monitoring and early detection. Recently, FAO adapted ASIS for use in particular countries.

With the global ASIS, FAO created a tool that uses EO data to monitor farmland potentially affected by droughts on a global scale. It is used to support the Global Information and Early Warning System (GIEWS) at FAO Headquarters in Rome. FAO receives the data every ten days at 1km resolution from ASIS, which runs an analysis using the Vegetation Health Index (VHI) as a measurement and “generates a map showing hot spots around the world, where crops are affected by water stress during the growing period”. For clarity, these hotspots are confirmed by information from public institutions on site. Country-level ASIS, also established with assistance from the European Union, monitors farmland potentially affected by droughts in particular countries. It includes various additional functions compared to global ASIS. For one, it makes crop-specific analysis more granular by, amongst other things, introducing water stress sensitivity for each phenological phase. Additionally, it gives users the flexibility to choose several levels of drought in comparison to only considering severe drought conditions as is the case for global ASIS. Country-level ASIS also allows for the calculation of the likelihood that a single pixel will be affected by a drought by the end of the crop cycle. For more details on the country-level ASIS and to find out about its other innovative functions, click here.