Atlantification and Its Recent Effects on Arctic Sea Ice 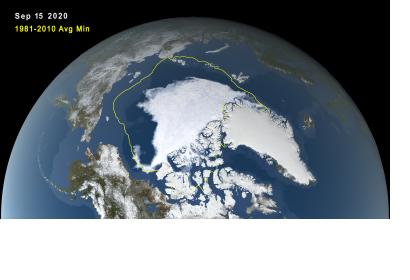 The accelerated demise of sea ice in the Arctic Ocean is daunting and a cause for concern. Satellite evidence shows that the encroachment of warmer waters from the Atlantic Ocean are causing a decrease in ice regrowth in winter. Satellite-based forecasts are vital for fisheries, shipping, and indigenous communities. In particular, the European Space Agency’s SMOS and CryoSat satellites are being utilized in sea-ice predictions.

The quantity of floating sea ice in the Arctic Ocean is variable as it seasonally increases and decreases. Even though thicker ice lingers year-round, climate change has provoked the curve of diminishing ice. Arctic ice reaches its peak in March, after the winter season, and diminishes to its lowest point in September, after thawing during the summer. Apart from seasonal changes, this fluctuation is caused by global warming and the temperature of adjacent ocean waters, weakening vulnerable ice.

Prior findings showed that due to thin ice growth exceeding that of thick ice, sea ice could be restored after a summer melt. Recent research nonetheless indicates that this effect is undone by ocean warmth, diminishing in the process the extent of ice regrowth in winter, signifying the fragility of sea ice during winter storms and warm summers. The European Space Agency’s Climate Change Initiative has provided satellite data to scientists, who have been evaluating fluctuations between 2002 and 2019 in the volume of Arctic sea ice.

Atlantification is the process of sea ice edge receding due to warmth from the Atlantic Ocean traveling to higher latitudes. Researchers from the Alfred Wegener Institute (AWI) Helmholtz Centre for Polar and Marine Research have calculated the amount of monthly ice growth due to freezing through mapping regional variations in sea-ice volume caused by drifting, with the use of model simulations, which confirmed the outcomes. Their observations over the past decades have shown a link between low quantities of ice at the beginning of the freezing season and its increased growth in winter. However, as noticed in the Barents and Kara Seas, this effect is destabilized by warm temperatures and ocean heat, which decrease the winter growth of ice. Through Atlantification, sea ice loses its resilience when faced with strong winds and warm summers. It is believed that such stabilisation in the Arctic could eventually be overpowered.

Data from CryoSat on ice-thickness have significantly contributed to research on Atlantification. This data, in combination with those from the SMOS satellite, are crucial to further developing forecasts of thin and fragile sea ice. Every week, AWI produces a weekly average by combining data from CryoSat with daily data from SMOS, which is, in turn, used for forecasts. The merged data demonstrate that in the winter of 2020-21, sea-ice volume reached its lowest point since the beginning of the production of such data in 2010. According to researchers of AWI, thick sea ice was nearly non-existent last winter. Such information has the potential to advance future weather and climate forecasting.