EUMETSAT: Measuring the temperature of lava with satellites 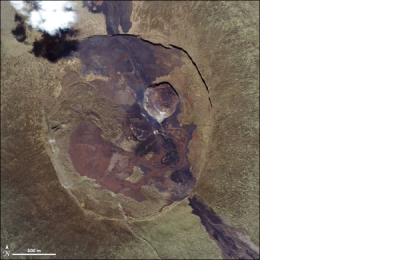 Scientists used data from from the Spinning Enhanced Visible and InfraRed Imager (SEVIRI) onboard Meteosat satellite to measure the temperature of the lava lake at Nyiragongo, in the Democratic Republic of Congo. The scientists compared the satellite data with ground data from a thermal camera. This technique was used for the first time during a lava fountain at Mt. Etna in August 2011, by a team from the Istituto Nazionale di Geofisica e Vulcanologia (INGV) in Italy guided by Dr. Gaetana Ganci.

EUMETSAT elaborated: "Dr. Ganci and her colleagues developed an algorithm they call HOTSAT to detect thermal anomalies in the Earth’s surface temperature linked to volcanoes. They calculate the amount of heat energy being given out in a target area based on analysis of SEVIRI images. Combining the frequent SEVIRI images with the more detailed but less frequent images from NASA’s Moderate Resolution Imaging Spectroradiometer (MODIS), they showed that temperature anomalies could be observed from space before an eruption is underway. They believe that space-based observations can be a significant help in the difficult task of predicting volcanic eruptions, but that providing advance warning will never be easy."

“Combining different kinds of data from the ground and from space would be the optimal condition – including infra-red, radar interferometry, seismic measurements etc. Space-based observations can be a significant help in the difficult task of predicting volcanic eruptions, but even in well-monitored volcanoes such as Mt. Etna, predicting eruptions is not a trivial thing.” said Ganci.