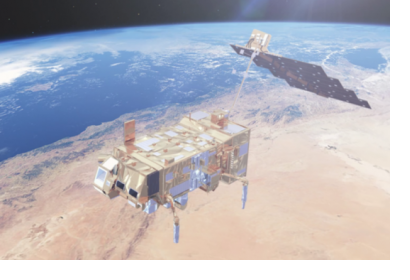 Europe’s newest weather satellite was launched into orbit on 7 November and is set to bring more accurate forecasts than ever.

The rocket was carrying the 4083 kg MetOp-C towards its destination of polar orbit. About 60 minutes after take-off, Soyuz’s upper stage delivered the satellite into orbit and contact was established through the Yatharagga ground station in Australia.

The new satellite is the third in the MetOp series as its name suggests and it was procured at the same time as MetOp-A and B, but has been sitting in storage until now. MetOp-A was in 2006 and MetOp-B in 2012.

How does it work?

Most surprisingly, one instrument on board the new satellite is 17 years old.

Made in Britain, the Microwave Humidity Sounder (MHS) can detect water in the atmosphere, whether that is fog or rain inside a hurricane.

Due to being in storage for so long, MetOp-C was often pulled out to have its systems checked and ensure it was all still working.

Dr Dieter Klaes, from the European Organisation for the Exploitation of Meteorological Satellites (EUMETSAT), which operates European weather satellites, said MetOp-C is expected to be in operation until the next load of technology comes in, which will be early next decade.

Klaes told the BBC: "Metop-C was regularly tested. Whenever these satellites have been in storage, there is a health.”

“The instruments are switched on and tested and we see whether there has been a degradation. The European Space Agency (ESA) and industry did a tremendous job to put all the spacecraft parts - in terms of payload module, service module and instruments - into a shape where they’re ready for launch”.

Polar orbiting satellites like the MetOp series fly quite low to the ground in the grand scheme of satellites. At 800km, they probe the Earth’s atmosphere to assess the humidity and temperature of the area they are working on.

How has MetOp-C improved forecasts?

MetOp-C is currently in what is known as its ‘Launch and Early Orbit Phase’ (LEOP), marking one of the most critical times in a satellite’s lifetime.

The MetOps have had a significant impact on the quality of the weather forecasts produced today. Since the first two MetOps were introduced, mistakes in the 24-hour forecast have reduced by 27%. There have also been significant accuracy improvements in medium-range forecasts; those that are predicting the weather for several days in advance.

The future of European satellites

The design and procurement of the MetOp satellites was done by the European Space Agency (ESA), which is currently developing MetOp-SG (Second Generation). This new satellite will be much more advanced and, differently to the way it is currently done, instruments will be deployed across pairs of platforms.

The MicroWave Sounder (MWS) will replace the current MHS, and again this will improve the quality of forecasts.

MetOp-SG is currently set for launch in 2022.

This article was contributed by Lucy Skoulding, UN Online Volunteer mobilized through  www.onlinevolunteering.org.