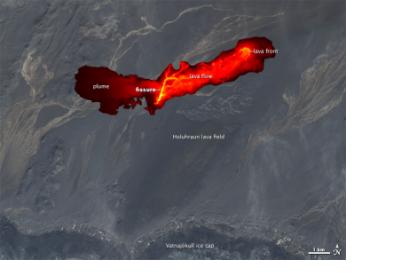 Early this week, NASA satellites were first able to capture infrared images from space of the active Bardarbunga volcano in Iceland. Up until now, "satellite imagery has been scarce because of persistent cloud cover and a relatively small number of spacecraft that collect images at high latitudes," as NASA reported.

NASA elaborated: "Overnight on September 1, the Advanced Land Imager (ALI) on NASA’s Earth Observing-1 (EO-1) satellite captured the first high-resolution view of the scene. The image is a composite of a natural-color observation from August 27 overlaid with an infrared (IR) night view from September 1. The night view combines shortwave IR, near IR, and red wavelengths (bands 9-7-5) to tease out the hottest areas within the vent and lava field. The image shows at least a 1-kilometer fissure and lava flowing in channels. The front of the flow has been moving mostly to the northeast in recent days.

To date, the Bardarbunga eruption has produced lava flows and fountains, but no ash plumes. Such plumes could greatly affect the air traffic over Europe as has the eruption of the Icelandic Eyjafjallajökull volcano in 2010.