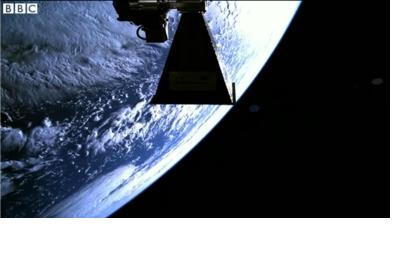 On 8 July 2014, the UK’s TechDemoSat-1 (TDS-1) manufactured by Surrey Satellite Technology Limited (SSTL) launched from Baikonur in Kazakhstan began capturing video moments after its release from the Russian Soyuz -2 rocket.

The video captured by the platform's cameras is said to be the first by a wholly British made spacecraft incorporating low cost “off the shelf” components. SSTL envisions similar low cost cameras to be used monitoring mobile satellite systems and deployable structures on future satellites.

"In the future, we see such cameras becoming a standard on spacecraft so that you can see precisely what's happening," explained Luis Gomes, director of Earth Observation and Science at SSTL to the BBC.

Also to be tested on the TechDemoSat platform is a large drag sail designed to aid in speeding the satellites return to Earth reducing the amount of debris in orbit.

TechDemoSat as the name implies is a proving ground for testing developing spacecraft systems with the goal at marketing technology to companies and space agencies conducting space missions around the world.