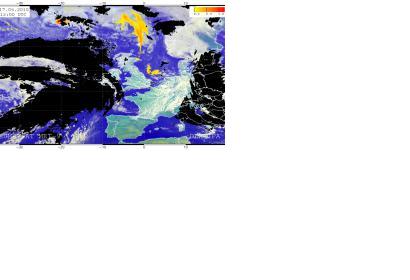 Researchers at the German Aerospace Center (DLR) have developed a satellite-based prediction tool for volcanic ash distribution. It generates detailed images of areas with both heavy and light ash loads.

"The eruption of the Icelandic volcanoes Eyjafjallajökull in 2010 and Grimsvötn in 2011 demonstrated the vulnerability of the air traffic system in the event of volcanic eruptions and exposed gaps in the observation systems for volcanic ash," says Markus Rapp, director of the DLR Institute of Atmospheric Physics. "Because of this, we decided to develop a process to precisely track ash clouds using satellites that are already in space."

DLR reported: "A prototype of the new procedure for satellite-based volcanic ash detection (VADUGS - Volcanic Ash Detection Utilizing Geostationary Satellites) is ready for its first deployment in the event of an ash cloud resulting from the Bardarbunga volcano eruption."