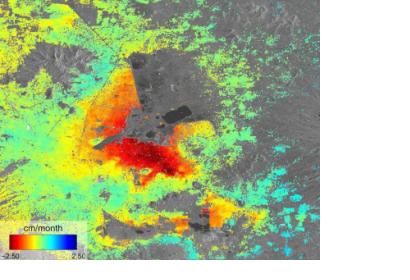 Five radar scans from ESA's Sentinel-1A have been been combined to create an image showing ground deformation in Mexico City. The image demonstrates that some areas of the city are subsiding at up to 2.5 cm/month.

The radar scans were acquired between 3 October and 2 December 2014 and presented at the InSARap Workshop at ESA’s ESRIN center for Earth observation, in December 2014.

According to the USGS Water Science School, the instability is caused by long-term groundwater extraction. This has damaged colonial-era buildings, buckled highways, and disrupted water supply and waste-water drainage.