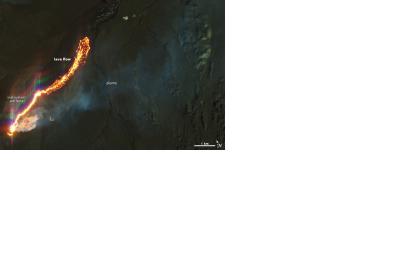 Bardabunga volcano in Iceland has started erupting in August 2014 accompanied by swarms of earthquakes in the near area. Tremors have continued ever since with up to 500 per day. NASA and other satellites have been monitoring the developments from space.

On 20 September, the Advanced Land Imager (ALI) on NASA's EO-1 satellite has captured yet another shot of the Holuhraun lava field. On the infrared image, hot lava is depicted in orange-red.