Indonesia: Sumatra is covered with haze from ongoing fires 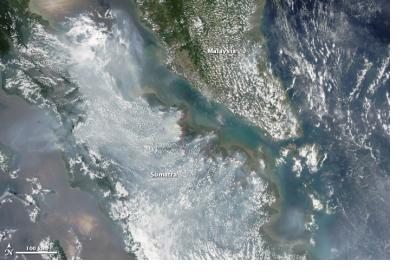 Since February, many fires have broken out on the Sumatra peninsula in Indonesia, as UN-SPIDER reported; many of them were deliberately set in order to clean the land. Although this is illegal, it is still a common practice in the region. NASA’s satellites Terra and Aqua monitor these fires from Space.

Since the fires have spread widely in peat forests, the produced smoke is denser than normal. Also at risk is the Giam Siak Kecil-Bukit Batu biosphere reserve that contains a wide range of animal and plant species.

Normally, fires occur in Indonesia during the dry season between April and October. This year the fire season started earlier and has already forced Indonesia to declare a state of emergency because of bad air conditions.