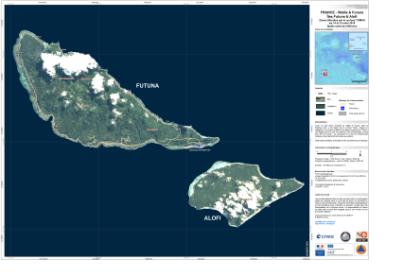 In the context of Tropical Cyclone Evan, the International Charter "Space and Major Disasters" was activated twice to provide satellite-based emergency maps.

The first activation was initiated by UNITAR/UNOSAT on behalf of UNOCHA for Samoa. Tropical Cyclone Evan struck Samoa on 13 December 2012, and made landfall as a Category 1 storm before intensifying to Category 3. The cyclone passed over Samoa for two days before moving on. At least four people have been reported killed and the entire nation of Samoa has been affected by the storm. Evan is reported to be one of the most destructive cyclones to strike Samoa on record and in the aftermath floods and landslides have caused further damage. Widespread damage to crops and infrastructure have resulted, and 4,500 people have taken shelter in refuges so far. It is expected that there will be food shortages following the loss of crops. The worst affected areas were those on the coasts and near river banks. Power was lost to the country following the damage to the electricity network, but repairs are underway with emergency power going to hospitals and other emergency services.

Three days later, on 16 December 2012, the Charter was again activated for Wallis and Futuna Islands after Evan passed over the French territory between 15 and 16 December 2012. The storm had intensified to Category 4 by the time it reached the two islands but no casualties have been reported. The storm caused damage however, particularly to Wallis Island. Most of the damage caused was to infrastructure and roads, and twenty houses were reported destroyed, but relief efforts are underway. The Charter requestor in this second case was Direction Générale de la Sécurité Civile et de la Gestion des Crises (COGIC).