International Charter activated for Cyclone Mahasen in Bangladesh and Myanmar 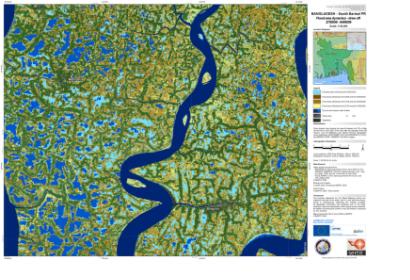 On 15 May, 2013, UNITAR/UNOSAT, on behalf of UNOCHA, activated the International Charter Space and Major Disasters to obtain satellite-derived image-products for the impact of tropical cyclone Mahasen.

Cyclone Mahasen struck the southern coast of Bangladesh, on 16 May 2013, and is expected to affect as much as 8.2 million people in the area. Hundreds of thousands of people have been ordered to evacuate in advance of the oncoming storm in Bangladesh and neighbouring Myanmar.

While the storm has not been classified as severe, the main concerns are about the resulting floods and landslides left in the cyclone's wake. This was evident in Sri Lanka, where at least seven people were killed in floods and mudslides even though the cyclone did not make landfall in the country.

There are reports that two people have been killed in Bangladesh, so far, and fifty people were killed in Myanmar while attempting to evacuate by boat on 14 May. It is forecast that Cyclone Mahasen will drive further inland and weaken in Bangladesh and Myanmar over the coming days.

Satellite images and image products will be made available on the International Charter's website.