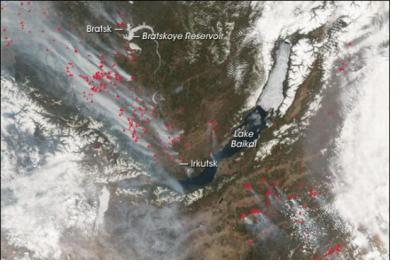 The International Charter: Space and Major Disasters has been triggered to provide satellite-based emergency maps in response to a major forest fire in Russia’s Siberian district. The mechanism was activated yesterday, 13 August 2015, at 15:51:00 (UTC+03:00) by ROSCOSMOS/EMERCOM.

The International Charter reported: “The fires began in July and despite efforts to fight the blazes, the fires have spread to cover an area of approximately 100,000 hectares. 45 people had to be evacuated from Lake Baikal, a popular tourist destination in the summer, due to the fires. The evacuees reported black skies and choking ash in the air as the thick blanket of smoke covered the area.”

The wildfires started after a summer heat wave with temperatures of 38 ºC. In addition to the high temperatures, the area has been suffering drought and strong winds, a combination that make more difficult the efforts of the fire fighters to quell the fire.

The satellite-based maps will be uploaded to the International Charter's website as soon as they become available.