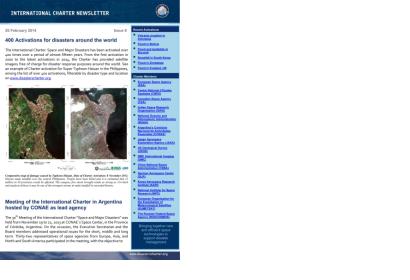 The International Charter: Space and Major Disasters has issued its 8th newsletter.

Among other topics, the newsletter highlights that the mechanism has been activated over 400 times since it was created almost fifteen years ago, including for major events such as Super Typhoon Haiyan in the Philippines in 2013, the 2010 earthquake in Haiti and the 2011 earthquake and tsunami in Japan.

The International Charter: Space and Major Disasters is a cooperation among space agencies to provide Earth Observation information and maps for major disasters worldwide.