The International Charter Space and Major Disasters, a worldwide collaboration among space agencies through which satellite-derived information and products are made available to support disaster response efforts, is marking its 20th anniversary this year. Since starting operations on 1 November 2000, the Charter has been activated 680 times (as of 19 October 2020) to support disasters in 126 countries.

The Charter was signed by the European Space Agency (ESA), the French Space Agency (CNES) and the Canadian Space Agency (CSC) on 20 October 2000, the former two agencies having proposed and announced its creation at the Third United Nations Conference on the Exploration and Peaceful Uses of Outer Space (UNISPACE III) in July 1999 in Vienna. Over the years, membership has increased to now 17 space agencies and space system operators, which operate 61 satellites providing Earth observation data to disaster management agencies around the world.

The figures below show the distribution of Charter activations according to the disaster type and geographic location. 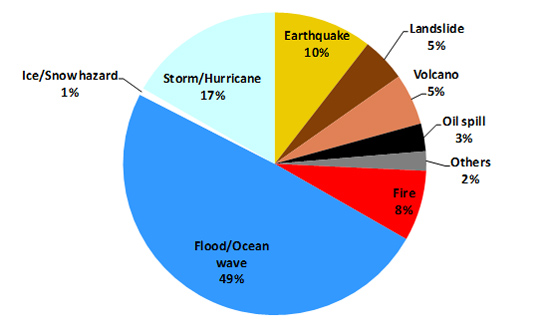 Charter Activations by disaster type: Water related hazards such as floods and storms are the most common disasters. Figure: International Charter Space and Major Disasters. 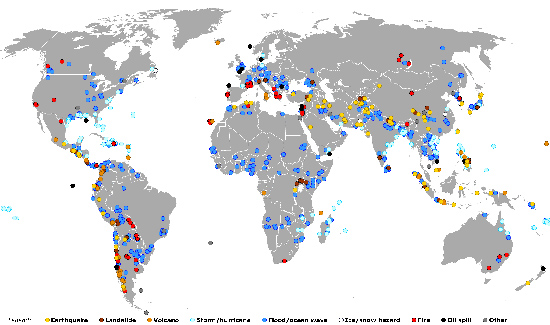 Charter Activations by geographical distribution. The Charter responds to emergency calls from all over the world. Figur​e: International Charter Space and Major Disasters.

Building on a decade of success in making satellite data progressively more available for disaster response, the Charter opened its doors even wider: in September 2012, the Charter members adopted the principle of Universal Access to further strengthen the Charter’s contribution to disaster management worldwide. Under this principle, any national disaster management authority can register and be incorporated as an Authorized User. Subsequently, it can submit requests for emergency response support. Certain procedures must be followed, but the affected country does not have to be a Charter member.

As a result, UNOOSA has requested the activation of the Charter over 90 times since 2003, most recently on behalf of the General Directorate for Civil Protection (DGPC) of Niger for floods that took place in the country in September.

Besides requesting the activation of the Charter, UNOOSA has also promoted the Charter’s Authorized User Initiative among disaster management agencies in developing countries through its UN-SPIDER programme. The latter is also regularly hosting trainings for Project Managers of the Charter: The most recent of these took place on the UN Campus in Bonn, Germany, on 5 November 2019 and brought together more than 20 professionals from Tunisia, Ethiopia, Ghana, Sudan, South Africa, Brazil, Belarus, France and Germany. One of the focal points of discussion was ways to more strongly involve African institutions in Charter activations and satellite-based support to disaster response.

On the occasion of its 20th anniversary, the Charter has published a series of articles about its activities, which can be accessed at the links below: