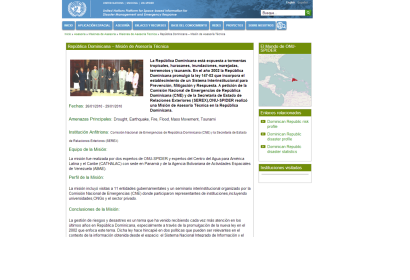 We are happy to announce that on 18 February 2014, UN-SPIDER officially launched the Spanish-language version of its Knowledge Portal: www.un-spider.org/es.

By making available relevant content of the Portal, such as selected Regional Support Offices, mission profiles and emergency mechanisms in the Spanish language, the UN-SPIDER team aims to allow more users from Latin America and the Caribbean, where UN-SPIDER has already conducted numerous activities, to benefit from the resources made available on the website. Users can easily switch between the Spanish and the English version by clicking the corresponding language buttons at the upper right corner of the page.

While the Spanish-language version is continuously being further developed and improved, we appreciate all comments and suggestions. Feel free to get in touch with us via the contact buttons or by email (un-spider [at] unoosa.org).

In addition to Spanish, other official UN languages will be added in the future in order to make the Knowledge Portal available to as many users around the world as possible.